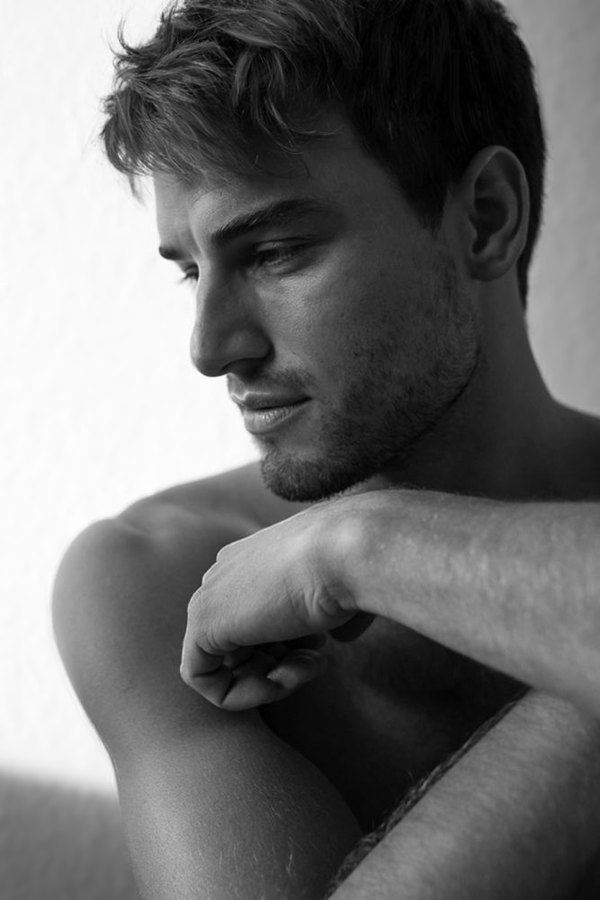 It was instinctive in every sense, those protective desires so readily and naturally expanding within a matter of mere moments to ensnare his newborn son. Tobias so hardly questioned that very thing. Indeed, the deviant so readily seemed to accept that baby the moment he was born in just the fashion any parent would. Yet- for those first few moments his attention remained upon raven alone, Tobias near fixated upon his mate and that pain that, at last, seemed to leave her figure and her voice. He remained seated beside her, as he had been told, Tobias was familiar with birth even if this birth was dramatically different from the first he had seen. Those sights and scents were tucked within the dark confines of his memory. The young man, in the very least, hardly prone to panic at his wife's clear distress and yet his gaze so hardly left her all the same. Each muscle within his own figure was drawn taughtly. Tobias ready to defend Raven from anything and everything in that singular moment of vulnerability. Those protective instincts were nothing if not fixated upon his wife alone- until that newborn was returned to her. Raven reached out instinctively to take the child. Tobias, once more, inclined to merely watch that interaction with clear curiosity. This, he knew, was the child Raven had talked about arriving for so very long.

Tobias's features frowned ever so slightly in curiosity. The sight and scent of the baby so decidedly...new in every way. His own hand extended slightly, his fingers reaching to brush softly the child's cheek in a clear and deliberate gentleness. That touch, somehow, distinctly important to the lanky man before his hand withdrew once more. For several moments longer Tobias was merely content to...stare at his newborn son. Those fractured pieces of his mind slowly, but surely, attempted to place the child within the mental hierarchy of his mind and too- to compare him to that other information that already rested within. It had been...years since he had seen his elder children. Nadya so having removed them from him entirely. Tobias, in turn, held little emotion in any sense for the twins. They existed as little more than fleeting memories within whatever fractured part of his thoughts held those lingering emotions. This child was....different. How readily he understood such a thing- in whatever way Tobias might be inclined to understand. His desire to hold his new son was distinctly clear. The young man seeking...more of that connection then the mere touch he had reached for. Those stuttered words however still held a distinct note of...hesitance. Nadya, after all, had forbade him from holding her children for fear of harming them. Those memories, it seemed, were distinctly intact. That Raven might readily refuse, it seemed, was near anticipated as the deviant hesitated. For all his boldness, for all his wildness, even tobias so understood that to reach for a child within its mother's mothers arms was....dangerous. The young man inclined to wait for that permission as Raven moved to sit herself slightly upward before querying whether he remembered how to hold the baby.

His head nodded in assurance. Tobias remembering well that doll Raven had introduced over and over. The deviant, for several weeks, having used it as something of a chew toy within his leopard form. The way its arms and legs flopped about was....enticing. His animalistic side having been thrilled with such a toy even if Raven had despaired over and over that he was not meant to play with it like that. Raven's efforts to show him how to play with that doll however had prompted Tobias to insist that it was a boring toy. They Were so often incapable of understanding that higher order of thinking. That doll, after all, was a toy. His son was not a toy. Ravens attempts to compare them- while logical, so hardly seemed to register within his mind. That distinction had always been nothing short of clear. Raven, it seemed, so hardly having to worry. That practice holding the doll that Raven had insisted upon, however, so seemed to have been retained somewhere within the deviants mind- his arms moving into that correct position. Raven shifted then to lean over and place the baby gently within Tobias' arms. His figure shifted near automatically to keep the child's head up, a faint simper tugging at the corner of his lips. Raven's insistence that he say hello to his son was met with a vague tilt of his head. Tobias' dark gaze resting entirely upon the child within his arms.

The baby shifted, his body wriggling, Tobias forced to hang on tighter less the boy wriggle out entirely and yet those small movements prompted a ready grin to his features all the same. Raven's sudden soft suggestion that they needed to name him saw Tobias' features frown once more as his gaze turned back toward his wife near curiously. Rhett? His head tilted once more, Tobias muttering to himself for several moments, as if trying out that new word, tasting it upon his lips before his head nodded. The man seemingly satisfied with this new word.

Yes. A good word. He was sure. That concept of first or middle name however seemed to prompt no small amount of consideration in the man. Whether or not Tobias even understood that concept so remained to be seen. It had taken him weeks, after all, to understand his own last name. Let alone the notion of a middle one. A silence of sorts seemed to persist for several long moments as Rhett shuffled within his Fathers arms once more. Tobias' gaze shifted from Rhett and toward Raven once more. That struggle within his mind to comprehend that question was surely clear and yet those words, at last, managed to fall from his lips.