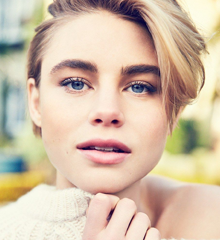 Name
Olivia Briar Fletcher
Nicknames
Date of Birth
Thursday, December 18, 1997
Age
23
Gender
Female
Species
Vampire
Ethnicity
French
Natural Hair Color
Blond
Predominent Eye Color
Blue
Height
5'5"
Sexuality
Pansexual
Living
Unknown
Power
Weakness
Face Claim
Other Information
Powers- Her powers currently only manifest when she feeds, and they tend to manifest as her gaining copies of memories of those she feeds on. History- Olivia lived a a normal life until the age of twenty one. Her parents were happily married, and they had raised Olivia as well as any parent's can. A few days after her birthday she went to a party with her friends, and everything changed. The party was a celebration of everyone in their friend group finally being of legal drinking age, and everyone was doing things to make the night memorable. Most drank far too much and so had Olivia, but a handsome man caught her eye. She was charmed easily enough by the man who let her away from the party. It was only once they were away the man began to wax poetically about her. He said things about how he would change her world. Olivia laughed it off as she thought he was just being funny because they were both drunk. It was only when the man turned to her a forcefully bit her neck that she realized how dangerous the situation was. Her consciousness mostly faded until the only thing she could feel was extreme thirst. It was then she felt warm liquid flowing into her mouth. She didn't care about the taste. She just wanted something to quench her thirst. After the flow stopped she lost consciousness. She awoke some time later to the sound of the man calling for her. Her body felt great except for a the beginning of a gnawing hunger. Despite what the man had done to her the night before Olivia found herself compelled to listen to him. He gave a short explanation of what they now were. He then brought out a human he had bound and gagged saying that she would be hungry. As she saw the man that had been chosen she felt her hunger grow. She walked walked over ignoring the tear that streamed down the man's face. She was consumed by her hunger as she sank her new fangs into the man's neck. She was in heaven for the first few seconds until images flashed in front of her vision. Her latent power activated and she saw the man's wife and children which her new sire had killed in front of the man. She came back to herself now covered in blood holding the lifeless body of the man. The man's sorrow became her own until again she heard that voice. Her creator called for her. Something stirred inside her. Her humanity was no longer over taken by the hunger. She turned and leaped at her creator before she could realize what she was doing. They fell, and a large piece of wood happened to pierce her creator's torso. He threw her away before it could do the same to her. Olivia screamed as her creator died. Something in her mind seemed to break and she lay screaming on the floor until morning when she passed out. The next night when she awoke she ran. She couldn't tell you why, but she ran. Fear was all she could feel. Every time she saw someone she felt like they knew her crime. A crime she could still feel in the center of her being. She ran blindly, but now it has brought her to Sacrosanct.