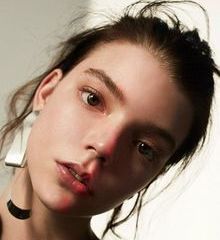 Name
Sigrid Gage Dagen
Nicknames
Date of Birth
Monday, November 12, 0998
Age
1022
Gender
Female
Species
Fairy
Ethnicity
Scandinavian
Natural Hair Color
Dark Brunette
Predominent Eye Color
Brown
Height
5'8
Sexuality
Bisexual
Living
River Dale
Power
Weakness
Face Claim
Anya Taylor-joy
Other Information
Sigrid was born on the Norwegian coast by a Viking father and an enslaved mother who died giving birth to her. As a bastard daughter, Sigrid worked with what she had to be what she could. She was well-liked enough but was sold at the age of twelve during a trade between her father and a foreign stranger. Fortunately, the stranger was a gentleman with a kind wife. She worked for them at their farm, learned their languages and odd traditions. They cared for Sigrid like an adopted child, of which they appeared to have none, until she was more than old enough to begin a family of her own. It was at that time they held her inside, performed terrifying rituals, and killed Sigrid with such precision that it was clear they had done it hundreds of times before. She was resurrected as what she is now: a fairy. Sigrid made herself useful throughout the years by disguising herself as a witch deep in the Norwegian mountains. Vikings weren't strangers to the use of magic, so her presence was welcomed by many peoples who came to her for help in their darkest times. The extent of her work was usually just healing herbs and providing shelter to those who needed it, but the occasional storm in her favor certainly helped to accentuate her reputation. The simple fact that she did not age certainly helped as well. Eventually, as the world modernized, Sigrid became a legend of the woods rather than a reality. A run-in with hunters looking for the mythical witch of the mountains drove Sigrid away. She's been relocating every few years for the last couple of decades until she lands in Sacrosanct as a waitress posing as a student on a break.