See what it's like to be a vulture's lunch

Late. God he was late. Shit. So late.

Why in the fuck did they make these things so hard to follow!? Arlo paused in near the middle of that street, the man glancing down at that Google Maps upon his phone once more. The arrow that was so supposedly designed to represent him seemed to be unable to decide exactly which way he was facing. The app itself seemed to be constantly attempting to recalculate his route. Maybe that vampiric speed was confusing it? Maybe he should walk or....jog...lightly. He had to be close right? Arlo broke into that light jog, the vampire taking several more wrong turns before, at last, somehow, stumbling into the Creek Centre Square. The restaurant his agent had suggested was along here...somewhere. Arlo paused to glance along those rows and rows of restaurants. Even with that social distancing in place the Square was still busy. The fairy lights overhead affording it a pleasant sort of atmosphere. He'd have to bring Abby one night. She'd like this. Well- she'd like the fairy lights. Probably the food too if he could convince her to stop marvelling at the trees long enough. The mere thought of his girlfriend prompted a simper to his lips before Arlo hurried further into the Square, the Crusnik glancing at those restaurant names before, finally, spying that one he was supposed to be meeting this Cadence at. He was only.....seventeen minutes late. That wasn't too bad was it? Hell, he was going to get a lecture about this later. He could already tell.

Now to find her. Arlo's blue gaze hurriedly scanned over those patrons seated both inside and outside of that Italian restaurant, his eyes finally setting on a small, dark-haired woman seated alone beneath that fairy light canopy. That had to be her. Short, dark hair, violet couloured eyes. Well, he couldn exactly see her eyes yet but she was the only one sitting alone. Arlo easily wove his way between those tables then before at last reaching Cadence. One hand lifted to run through his own dark hair. That very gesture musing his hair entirely only to send it falling haphazardly in every direction, his free hand was quick to attempt to straighten that dark shirt he wore. Arlo dressed...decidedly casually for that supposed business meeting and yet that plain shirt and tattered jeans were, by far, his most comfortable clothing. The very kind he felt the most content within. The shirt still managed to hide those tattoos....mostly. The tail of the dragon on his shoulder dared to poke ever so slightly beneath the fabric. The multiple piercings within the helix of his right ear were a testament to the man he once had been... years ago. Arlo having worked distinctly....hard to move away from that very persona. Abby deserved better, after all.

Arlo held that free hand out towards her before casually kicking out that chair to seat himself opposite her. His phone placed on the table. Huh. She really did have violet eyes. Damn those were striking. Arlo shook her hand lightly then. A Were. The scent of her gave her away near instantly and yet there was something...else lingering with that scent. Something he couldn't quite put his finger on. An easy simper found his lips all the same. Arlo nothing short of good natured in every respect.

"I'm sorry I'm late I was trying to follow the google thing but it was like 'you are here' and i swear to god it had no idea where I was. It was just spinning in circles saying 'recalculating' over and over. I- oh, I think it thought I was in a car or something. Huh."

Arlo glanced down at that phone once more before reaching to turn off that screen, the phone turned over a moment later to prevent those further distractions. This was about business after all right?

"So you're from Blue Moon Lagoon, was it? My manager said it's a vampire owned bar. It's real nice of you asking me to play there and all but, I don't really do the vampire scene you know? It never goes well for me. Are there a lot of vamps at your place? It might be alright if its mostly Were's like you."

Arlo paused then as a waitress hurried towards them, the girl reaching that table only to glance upward before letting out a near sudden squeal at the sight of the vampire. oh my god! Oh my god! Could I get a photo with you or....your autograph, please? Her features had flared a near impossible red. Her sudden squeal having prompted Arlo to jolt in surprise in turn before offering her a polite grin. His own fangs flashed with that very gesture.

"Oh umm, yeah sure. I can sign like a napkin or something for you if you want? I might need to borrow a pen too. I keep losing mine."

The young waitress squealed again before all but racing back into the restaurant. Arlo left near blinking in her wake- before an amused simper tugged at his lips once more. His gaze turned to Cadence as a chuckle rose in his throat.

"Do you think she's ever coming back? She didn't actually take our order." 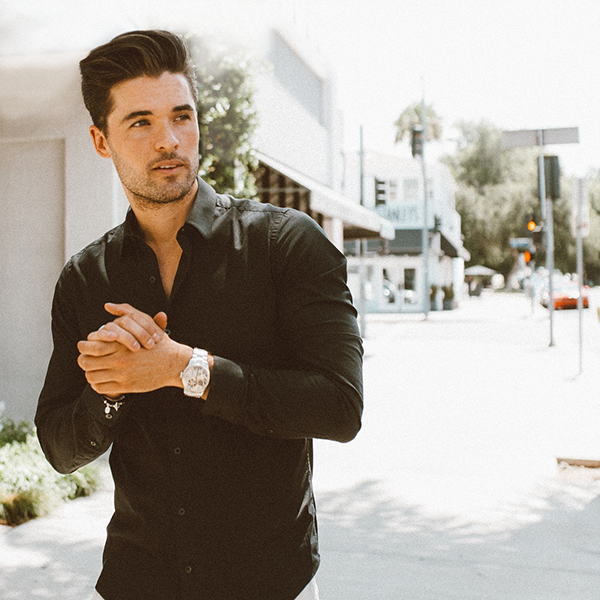