been sleeping over for the past couple of weeks

The Were-King leaned back upon his elbows and onto the golden throw tossed across the plush, crisp white bed. The vibrancy of his emerald irises, however, was steadfast upon Mira as she stared out the window of their hotel room. How enamored she had seemed with the luxury that surrounded them, it was an extravagance that had become the norm for Tetradore. That awe, however, had faded from the woman's fair features, only to be replaced with something far more curiously contemplative. It was...unusual...to see such a look upon her face and slowly, Tetradore's head tilted to the side as he watched the woman. A soft yawn echoed upon his lips, that exhaustion pulling at him so potently. The usage of his affinity had already taken a toll upon the man and yet, it was hardly that which saw him seeking the comforts of sleep. Quite on the contrary, it was the tranquility of finally being away from Sacrosanct...of finally being...safe. It was a phenomenon that often afflicted Tetradore in that time he spent away from the metropolis, the first few days often spent sleeping as his body simply compensated for all he was so often forced to endure. He was oblivious, however, that Mira too had noted this pattern, at least to some degree.

It was the soft utterance of his name that prompted his brows to furrow, the man offering her a soft sound of acknowledgement. Her request of him, however, only furthered the man's confusion, his eyes briefly turned towards the window to eye the same cityscape that so seemed to enthrall her. Frankly, Tetradore failed to see what was so entrancing about the evening hours and yet, if it was what she desired...it was a simple enough request to fulfil. After all, he had gotten strikingly used to simply...not sleeping. Before he could offer a response, however, Mira insisted on her abilities to further convince him of remaining awake. The very suggestion prompted an inquisitive raise in the man's brow, though even he could not deny he had...considered the ways in which he might enjoy that solitude they had finally stolen away from the rest of the pack. Here, there was no concern at keeping things...private. Here, he didn't have to worry of the eyes watching them, the ears listening to them, or who might learn of his actions and interests. The very mention of his title, however, prompted a roll of the man's emerald irises. God, how hard it was to take that word seriously! Even so, the near feminine pout upon her lips was....nothing short of utterly irresistible. Mira had to know how utterly kissable she looked.

The weight of his gaze remained settled upon the sway of her hips as she neared him, only to inquire, distractedly, what she had in mind. Her gesture towards the bed temporarily drew his attention, though his desire to sleep was one Tetradore easily pushed away. A soft chuckle left the Were-King's lips at her promise that he hardly had to leave the comfort of the bed he so lackadaisically lounged upon. Despite all appearances, Aiden was entirely aware of the desires that lingered upon her mind and how willing he was to indulge her! Mira settled on the very edge of the bed, the golden hue of her gaze entirely settled upon him. Tetradore took the moment to kick off his own shoes, the man well aware that the rest of his clothing would soon follow suite. She leaned closer towards him and already Tetradore found himself reaching up to meet her halfway. His fingers gingerly stroked her cheek as his lips met her own. How aware he was of her fingers pressed against the firm plains of his chest, the very fervor of that kiss entirely palpable to the Alpha and yet, tonight he was entirely hers for the taking.

Slowly, the woman pulled away from him, prompting his gaze to flutter open. His lips were parted ever so slightly in the aftermath of that kiss. He could still taste her, his tongue ran over his bottom lip as he listened to those whispered words - oh how she held all of his attention! That very look she provided him with only assured him she knew exactly what she was doing and yet, he hardly bothered to answer her before his mouth pressed against hers all over again. How easily he could get lost in her and yet, Mira seemed entirely inclined to make him work for it! The woman pulled back far before he was ready for her to. Her fingers reached for the hem of her shirt - the cotton fabric peeled off of her feminine curves to reveal that caramel flesh that Aiden was so intimately familiar with. He watched as she let the piece of cloth fall from her fingertips in an almost sluggish movement, the woman's voice entirely teasing as she commented of all the things she couldn't do in jeans. Tetradore could hardly help the roll of his eyes as he reached out for the woman. "Shut up and get over here, Mira." He commented as he pulled her down beside him.

Deftly, Tetradore shifted, the man sitting up just long enough to peel off his own shirt, the cloth deposited easily upon the floor before he moved to lean over her. His lips effortlessly found Mira's all over again and yet, his fingers were far more attentive with another task altogether. The button on her pants was quickly undone, the Alpha unzipping them before both they and her underwear were pushed down as far as he could manage without pulling away from her. Thankfully, Mira seemed perhaps as eager to see the rest of her clothes off, the woman breaking that kiss to further kick them on the ground. Tetradore was well aware of her hands upon his caramel skin, her fingers tracing the refined muscles of his chest before slipping downwards towards his own waistline. How quickly those clothes had become little more than a hindrance, the pair perhaps overzealous in their shared efforts to see them removed. It hardly took much of Mira's attention to bring that hitched breath to Tetradore's lips, the man found himself easily ready for her at her all too confident touches. Aiden, in turn, was equally diligent to ensure that wetness within her, the man becoming far more...used to those needs she required of him over the years they had been indulging in such intimate moments. After all, this, unexpectedly, had become the longest...intimate relationship he'd had of his own volition.

How easy it was to get lost within Mira! He could feel her fingertips exploring his physique, the heat of her skin against his own was all but intoxicating with every movement he made. The sensations her body offered him was nothing short of heavenly, his own unsteadied breath so quickly joined her moaned gasps. Tetradore was entirely inattentive to the time that passed while he was so lost within Mira's arms, the room steadily darkening as the afternoon sun reached for the horizon. All that mattered, in that moment, were those heated kisses and that heavenly rhythm the pair found against one another. He could feel Mira's fingers tightening against the skin of his shoulder blade, her figure clenching around him as his own steady movements only increased in pace - the man pushing them both ever closer towards that edge of utter bliss.

He could feel the way in which her body so responded to him, Mira seemed to linger for several precarious moments upon the edge before, abruptly, her voice sang those pitched moans as her feminine figure near spasmed beneath him in ecstacy. Oh how utterly difficult she made it to stave off that completion, Tetradore incapable of stopping himself from coming undone in the wake of her own completion. His figure was covered in a sheen of sweat, Mira hardly faring any better with her tousled hair and heavy breaths. A soft breath left the Were-King's lips as he flopped on his back in the soft embrace of those sheets. Mira nestled against his chest in that glorious aftermath of all they had done. The very sensation of her fingers tracing invisible paths upon his skin drew the emerald of Aiden's gaze downwards towards her. Tenderly, his lips brushed against her forehead, the gesture somehow...sweeter than he often afforded the woman in those moments after. His own breath slowly returned to its normal rhythm, his gaze slowly turned towards the window. "The sun is setting....you'll get your night soon." Tetradore murmured softly, his own thoughts still lingering inquisitively upon the woman's request. Surely it was not just the sex that had caused her to so wistfully stare at the skyline, was it? 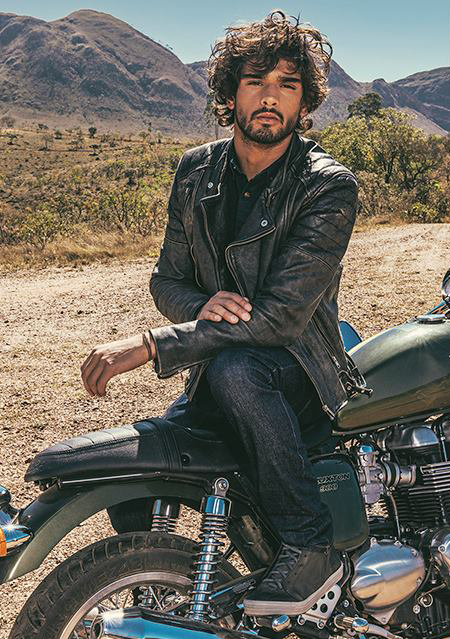