over the hills and far away

It was easy to ignore the steady thrum of the base, the plethora of voices, the sounds of hundreds of hearts as they beat their own rhythm and too-the scents of the living beings around him that cloyed the air in a thickened perfume. He had spent centuries ignoring them, after all. They had long since ceased to fascinate him. Quinton's mind, here and now, far more fixated upon the newspaper within his hands as he lent atop the polished bar with casual ease. He was aware, to some extent, that the human crowd had afforded him a wide berth. A semi-circle of vacant space having surrounded him even if the vast majority of humans could hardly deduce why they felt the need to avoid him. They were like sheep, after all. It only took a few of them to begin avoiding him before the rest followed suit. Not that it mattered. He was hardly hungry tonight. No hint of any desire to hunt touched his thoughts as his golden gaze skimmed the morning's news. The vampires that lingered within that bar were near as numerous as their human prey and yet they, with their supernatural abilities, at least possessed some reason to avoid him. Even those bar staff had retreated to the far side of the counter- as if they feared at any moment he might unleash upon them some unholy wrath born of age and resentment. How utterly....exhausting that sounded. Yet how pleased Quinn found himself with that solitude he had been unjustly awarded. Finally. At last. A chance to read the paper in peace. A truly rare and blessed event.

The distinctly ancient vampire had lost all track of time as he progressed from daily events, to weather, to world news and the stock exchange. He hardly cared for the change in song or the migration of crowds around him. His mind was sated, occupied, content. At least until the most subtle disturbance cast a ripple across that pool of contentment. She was stronger then the rest. She was aged. Not so old as himself no and yet- powerful in turn. Quinn's gaze flickered briefly at her approach, her femanine figure moving with the sensual grace and refinement their species alone was capable of as she slid her leather clad figure into the seat beside him. Her scent was unique and yet...potent. This was her territory. All of it. Perhaps she anticipated some sort of....threat from himself, Quinn hardly inclined to fault her for such a belief and yet how distinctly little desire he had to cause this bar any sort of distress. No. Tonight was a night for reading- and read he would. His gaze returned to that paper. The vampire was content to leave the felinesque woman to her business and yet- those distinctly French lyrics wove between the melody of the overly loud song to reach him. Her question was an almost perfect preposition in some fashion. It would be....impolite to ignore her. Those age old manners so prompted the vampire figure to shift as that newspaper was laid down atop the polished counter, his golden gaze shifting with a laconic ease to meet the striking blue of her own. Hmm. She was a fine creature indeed. In fact, she was very near the epitome of their shared species. A sanguine vampire in all her flawless perfection and femanine desire. Perhaps he might have admired her further were it not for the weight of the wedding ring upon his finger and the mere image of Leila's frown of discontent. Quinn's head shook softy

His own words held that distinctly European accent in turn. Ther utterance was rather soft and yet he was assured his companion with her supernatural hearing would capture those words all the same. The bar was his escape. A chance to read. An activity her presence had...disrupted and yet Quinn hardly found himself opposed to her company. It was rare, after all, to meet a being with even a hint of the age of himself and she- was a fascinating creature to behold. If her outfit alone was but any indication. The striking blue of her gaze was quick to meet his own once more as she queried after that drink. Quinn's figure shifted once more, offering her a view of that nearly emptied glass his arm had previously concealed.

"Oui. Ils ont été des plus attentifs. Pas plus que lui." (Yes. They have been most attentive. None more so than him)

Those french lyrics so easily parted his own lips, offering the vampiric woman her native language as the faintest of simpers tugged at his lips in satisfaction at his mind's ability to remember those words he had not sought to engage in a good half century at least. Ah, but the sharpness of the vampire mind still impressed him even now. It was that very mention of 'him' however, that prompted his head to nod ever so slightly to the vampire man who lingered within the shadows of that bar. A lynx at his feet. He was tall, fit, dark-haired and yet most striking was surely his eyes. Heterochromia was rare in any being, much less a vampire. A curious genetic mutation. One of....many within that man.

"He has been watching me very intently for some time. At first I thought he was some sort of security guard but he bears your scent more strongly than the rest. I suspect he is your mate."

How easily he returned to that English once more, his words holding little intention beyond that simple statement and too- a hint of curiosity. After all, she had interrupted his reading to talk, had she not? Quinn so hardly opposed to agreeable company or conversation.

His voice reached out toward her once more, abrupt this time and yet no less gentle in its almost lazy composure. Her fingers were hardly visible at that moment as his gaze cast down towards her hand in search of a wedding ring upon her finger- only to find it bare. Hmmm. Not married then. At least, not yet.

"When you get married one day you will come to understand the exquisite perfection to be found in but a few stolen moments to yourself to read the paper without your spouse trying to show you carpet samples or curtain fabrics or inform you of exactly what Mrs Fortesque-Brown told Mr Henley at the body corporate meeting. You will also come to relish in having even an hour without your daughter insisting that My Chemical Romance was, in fact, the most revolutionary band to ever exist and that it is a crime agianst nature itself that Fallout Boy is not comprised of vampires so that they may continue to spread their ear-drum rupturing music more proficiently through my house for all eternity."

How utterly deadpan the vampire's features remained despite the near...humorous note that found his words. Quinn offered a distinct and detailed explanation for his current position upon that barstool with paper in hand. He adored his wife and daughter more than life itself and yet, sometimes, he adored a moment of peace as well. A soft sigh easily fell from his lips then. His gaze met her own once more.

"I am merely a guest in your territory tonight and I intend to keep it as such. You need not concern yourself over my presence- though I wish you would convey that to your mate. He had considered launching himself at me at least twice before you sat next to me and ever since you took up that seat he has broken that wall beside him in several places in an effort not to launch at me. He seems a little young for you, non?" 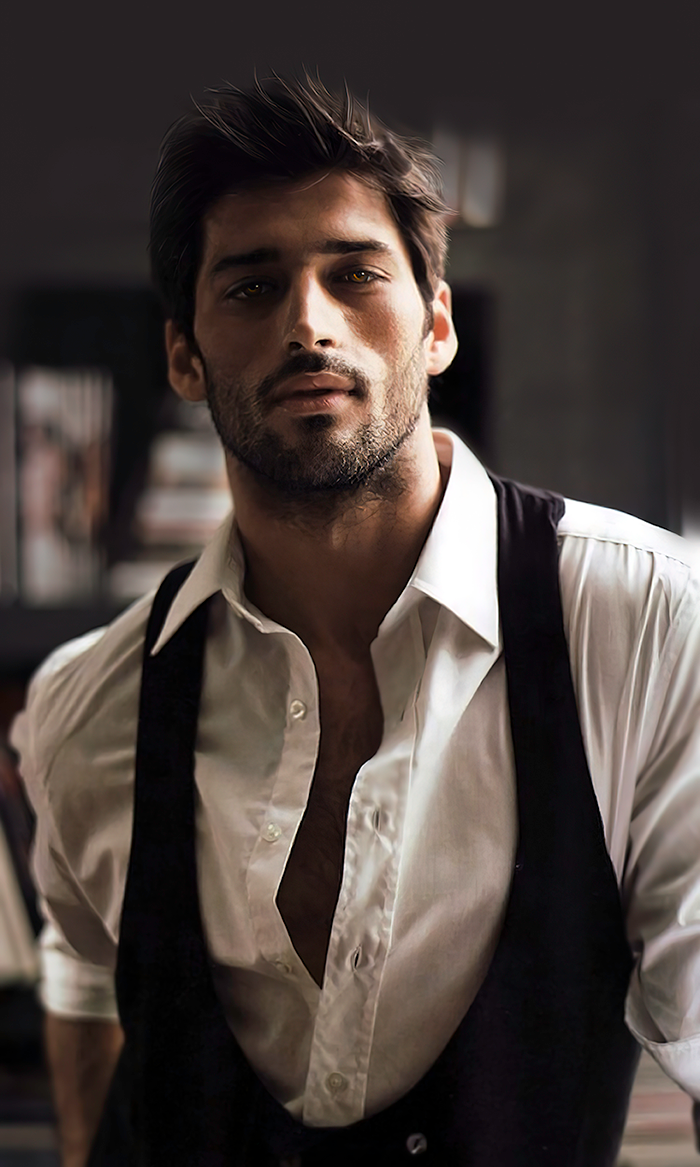