I'm rising from the stardust; 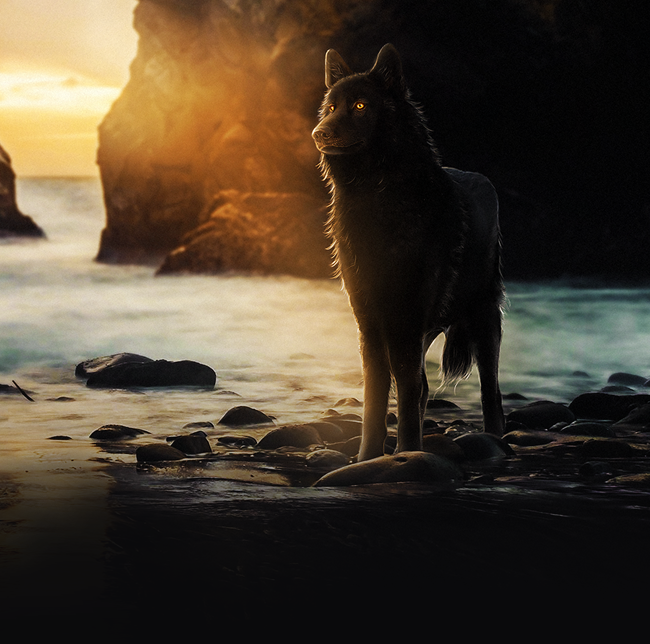 Mira grinned as Tetradore snorted in response. A vague sound that might as well have been considered some form of sarcastic laughter. Yet the woman held her own, somehow, certain in this, as silly as it was and even she could not hide the jest within her words. "You know.. An extravagant vacation home like celebrities use to getaway. Not some tiny off the grid pioneer home." It was admittedly quite fancy. Yet it came as no surprise that the were king had exceptional taste and it was the perfect place for a pregnant Raven and Tobias to find a slice of heaven in the wake of tragedy. How blissfully peaceful it was in comparison to the city. She could only hope the rest of the pack were able to possess some kind of reprieve too. The pair stepped out of the vehicle, delicious morsels of goodness in tow, safely within her hand. The vehicle chirped as it locked behind them, a habitual action because there wasn't a soul out here for miles, she was certain, besides themselves.

Mira wrapped around the car to join him, that gentle brush of their shoulders before their hands found one another, fingers laced together as her thumb trailed affectionately. She spoke of a trip out here when all of this was over. It seemed simpler than how it truly was. No, it would take time for the perfection of the new Ark to be crafted and then personally gathered. Oh, she could not wait for the pack to see it, it was going to be extraordinary. No one could fully be prepared for the ship that they had found for them. Although, who would want to leave that ship she hardly knew. But everyone needed a reprieve, even a short one when you lived in the same place that you worked. How she adored those moments they carved away for themselves, the distracted lines in Tetradore's face seemed to soften away from the city limits. Her insinuating tease had flown right over his head. He completely missed the point and yet it was so very the man she had taken as her boyfriend. She could hardly help that grin before she placed a kiss upon his cheeks. "I admire your confusion. But I don't think you'll mind." She added as they walked up those few steps toward the door. She would explain later if he asked but not now, not when that excitement of shifting with at least part of that pack seemed to override everything else.

They were met with dead silence. That knock upon their door was not enough to draw out their companions that dwelled inside.

How Mira had felt the pull of the moon... only fueling her with a little impatience. Had Raven and Tobi felt it too and went off without them? No that hardly seemed like the truth, there would surely be a note and an unlocked door. She was certain. Mira was grateful for the spare key that Tetradore carried with him. It didn't look like something had happened.

The she-wolf mirrored that frown. Her body was alive, crackling with energy from that impending shift. They could ignore the call of their animals any other night except for this one. That desire to run with one's animal self was impossible to ignore. She could hardly help but wonder what the rest of the pack was doing on this very night. She wondered even about the prickly raven-haired woman, Harley. Was she even safe to shift alone? Henry had been so sad well before tragedy struck, was he still sad and lonely? Did Alexis miss those pack nights too? Mira couldn't help but miss them all the same. She even wondered if Carolina was surviving well enough with the abrupt loss of her job. Mira thought of them all and yet it did not diminish the excitement of seeing Raven and Tobi. It was undeniable that she had missed them too, even though she kept in touch with Raven via text. It wasn't the same.

The pair stepped beyond the threshold of that door, Tetradore gestured her inside first. That home was even more impressive on the side, Mira allowed her gaze to scan the impressive, living space.

How those senses were far stronger on the night of the full moon. Their scent was still fresh. They had to be close.

It was fortunately not that long before Raven and Tobi emerged from wherever they had hidden away, most likely those bedrooms. It didn't need much to put together those puzzle pieces. The sound of Raven's voice drew both Mira and Tetradore's attention. She was happy to see them, the mere sight of them plucked something within her chest. Mira cast Tetradore a near mischievous knowing glance.

Raven moved across the room to hug them both, that scent of all bTobi and lust all too clear to ignore. Ah, it would seem they were affected by the powers of the lunar pull. Mira's smile hardly faded then. "It's so good to see you guys, I've missed you so much. You look utterly flushed! Are you going to be ok... to run? Are you not feeling well?" Mira couldn't help her harmless prodding of her friend. She didn't need details spoken to know that romance was still alive and well. Didn't everyone deserve a good romp every now and then? "I think we are all... feeling the effects of the moon.." She added knowingly with a nod of her head. There was no shame in that.

Her gaze shifted to Tobi who announced he did not want a hug. Mira hardly offended in the slightest as she knew Tobi well enough that she was content enough to get a verbal warning instead of a feral growl so close to the full moon! "It's ok Tobi, I won't. Although I will look at you affectionately from here." She seemed amused with herself. Tobi had eyes only for Tetradore, unsurprisingly, the brothers were inseparable. He seemed eager to show Tetradore that game, Mira offered those cookies to Raven. Her gaze fell down toward her belly that held a modest bump, but she was clearly showing. "Oh, Raven... How is everything going? Smoothly I hope?" She questioned as the pair moved toward the kitchen for a brief moment of privacy from the boys. It was easy enough to text but there was something about face-to-face interactions that were far more meaningful.

They were all content to enjoy each other's company for a little while as that sky darkened even more, illuminated by that silvery voluptuous moon that climbed ever higher in the sky. How Mira would feel that anticipation, that desire to shift a commanding tug she could feel like an itch she couldn't scratch. She was sure she was not the only one feeling it. "I think its time we head out." Mira uttered to Raven, her golden-eyed met her own baby blue stare. Her inner wolf was peeking through.

"Booys... I think it's time.. We all head on outside. The moon has risen and I don't know about you but I can't ignore it."