cause I've waited for all my life, 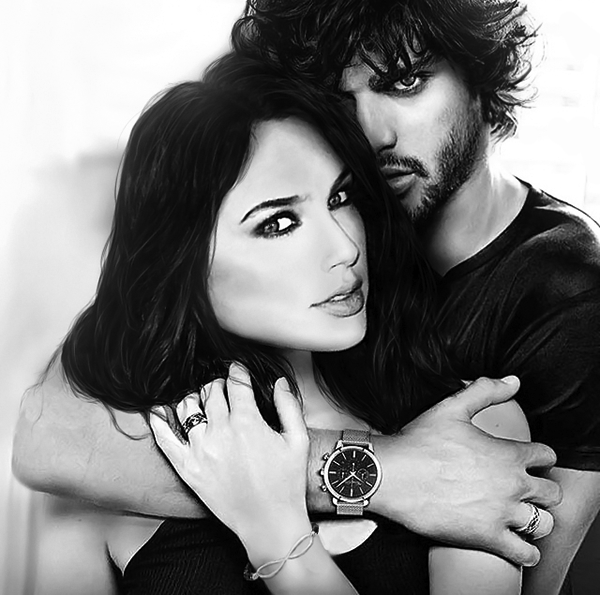 Effortlessly, his fingers encircled around the black cable of the cellphone charger Matteo tossed within his direction. He plugged the charger into the island, leaning over the counter slightly in the process before settling on the bar stool on the other side. It was his new found girlfriend's baffled inquiry that caused Aiden's emerald irises to glance up from his screen but briefly. "Uh....he um...teleported it." The Were-King responded, his broken sentence a product of his utter distraction with his phone nestled within the palm of his hand. It hardly took Mira long to mix those breakfast drinks, the woman returning to his side not long after with beverages in tow. He hardly glanced up from his study of the listing of cargo ships in the area, none quite meeting the criteria of what Aiden was searching for. It was only Matteo's declaration that breakfast was finished that drew his attention from the screen. For a brief moment, Tetradore put down his plate, hardly bothering with a word of thanks after so many years. He plucked a piece of fruit from the tray in front of him, popping it into his mouth as the doorbell rang, the sound alone indicating his grandfather's arrival.

Mira's inquiry upon his grandfather caused Aiden's head to bob, though Matteo hardly voice a syllable upon the previous evenings events. Rather, the fae Frenchman merely insisted it was MIra's duty to keep Aiden from the croissants (prompting a immediate glare from the Alpha), before disappearing entirely to leave the couple to their own devices. A soft breath left the Were-King's lips, his head shaking ever so slightly as he reached over the counter for one of those chocolate treats he'd been so restricted from fully indulging within. "Yeah, he is. I'm sure Alexander will come and say hi a bit later." He commented, only to bite into the croissant in his hands witth a soft sound of utter satisfaction. As much as he hated to admit it, Aiden was well aware just how divine his father's cooking was. The croissants surely worth all the effort the fae had put into them. Aiden was well aware of the weight of Mira's gaze upon him as she inquired after his brother-in-law. The Alpha's shoulders lifted in a vague shrug. "He's a vampire." Aiden answered simply, as if this explained everything. To him, naturally, it did and yet...he somehow doubted that Matteo's tendency to prod at the Englishman had entirely to do with his species. Regardless, there were far more important things to Aiden then Matteo and Sebastian's relationship...or lack there of.

His gaze turned idly down towards his cellphone in front of him, his free hand flicking across the screen slowly as Aiden took another bite of his croissant. Mira's sudden declaration to assist in finding their new home caused his emerald eyes to briefly shift towards her, the man awarding her with a soft simper. "Thanks." He continued scrolling through the listings of the local harbor, eying the industrial boats that filtered across his screen with little consideration given to the more...glamorous life style the Were-King tended to enjoy. He glanced up with a soft grunt at the gentle nudge to his ribs, Aiden popping the last bit of the croissant he had been eating into his mouth as Mira slid her phone in front of him, her chin resting upon his shoulder. He reached over towards the yacht on the screen of Mira's phone, flicking through the photos in relative silence even as Mira pointed out all of the amenities the boat came with as it was. He had hardly missed that near wistful tone to Mira's lips before the woman reached for one of the freshly made croissants and yet...Aiden was all too aware of the one thing that was largely missing from the boat's 'listing' - the price.

Aiden hardly bothered to interrupt his girlfriend's wishful consideration of the boat, even as he reached for his own phone. He navigated with ease to the designer's website, sifting through the 'contact' page for a phone number. It was Mira's inquiry on if it was too much, however, that caused Aiden to glance up with an almost mischievous smile. "Well, you never know." He replied as he pressed the call button on his cellphone, bringing it up to his ear. He listened as the phone rang before someone answered in a distinctly foreign accent. "Met Anika.". Aiden was hardly daunted by the equally as foreign language, however, leaning back in his seat as he responded, "Hi, I'd like to talk to someone about possibly buying one of your yachts."