Blow a kiss that leaves me gasping 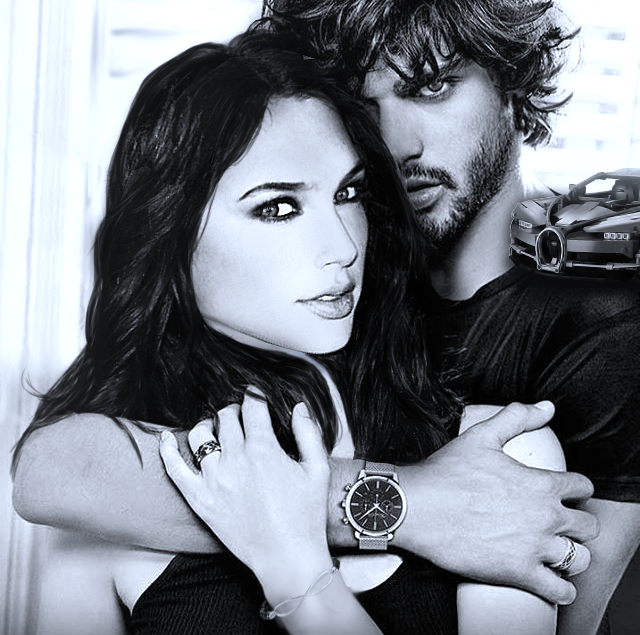 The vibrancy of his emerald eyes silently surveyed their hands, their fingers gently intertwining with one another as her fingers curled over his knuckles. How he wished it was as easy as Mira seemed to think it was to devote himself entirely within that relationship and those feelings he hadn't expected himself to foster for her. If only he was the uncomplicated man she thought he was, the one she surely deserved. If only knew all that she was committing herself to, would she still be as eager as she was now? His gaze slowly drew upwards towards her fair features and yet, for all those dismal thoughts, Aiden had hardly expected that inquiry on whether or not he was sleeping with someone else. The very idea was so starkly from the person he was that he could hardly help the laughter that so abruptly left his lips. Him?! Who had struggled with finding any interest in sex at all? Who could count on one hand the number of women he had voluntarily taken to his bed? He could hardly help the way he fell back upon the plush pillows, his hand falling to his side as he glanced at the ceiling overhead with a grin still settled upon his lips.

That huff upon her lips only furthered his own grin as he insisted that, she was the only woman that had garnered even an ounce of his attention. Even so, it was the very mention of his father that prompted her sardonic response, the pillow thrown at his face only furthering the chuckle upon his lips as his hand rose to lightly bat it away. That smile persisted, even as the pair remained comfortably nestled within the depths of the bedsheets. His previous evening with his father had, admittedly, left Aiden up later then he had thought he would be and, as a result, that tiredness still tugged at him enough to prompt a yawn upon his lips. It was almost tempting to return to that blissful sleep. Or at least, it would be if not for the distinct sound of pans in the kitchen. Matteo. He was certain, with his father in the house, that the Frenchman would hardly allow Dorian's servants to take over the task of those meals. Whatever his father was cooking would undoubtedly be worth getting up for.

Such a thought, however, was interrupted only by a query he truly hadn't been expecting -- his name. It was, admittedly, a difficult topic to fully explain, his reasoning entirely childish though one that had persisted even in spite of it all. Though his explanation that it was all he had of his mother, it was hardly the complete truth of that reason he kept that name to himself. It somehow represented far more to him than just a name...it was a promise of the man he could have been, it personified the part of himself he strove to keep free from Risque's harshness. In sharp contrast, his father had given him his family name, the Alpha blood that ran through his veins, and the strength to simply endure. Such a concept was one he struggled to properly put into words and yet, that she understood the surface sentiment was enough. It was Mira's idle comment of how rarely he spoke of his family that prompted a small shrug to his bare shoulders. "I don't remember too much of them." He admitted, those once warm and happy times had so quickly faded into the background when his life had consisted of despair and tragedy for so very long.

Sluggishly, Aiden sat up within the bed, the sheets still pooling around his waist and the hem of his boxers. The very notion that hearing his family call him by name was cute, however, altogether baffled him. A quizzical glance crossed his features, "That...is who I am here," He responded, only to add after a moment's thought, "Though just...don't go using it around the pack, okay?" It was permission, of sorts, from the Were-King to utilize that very name...at least here. Any further thoughts on the topic, however, were quickly replaced by the promise of pancakes, one that seemed to sufficiently distract Mira in turn. Aiden out of the warmth of the bed, his feet only just hitting the floor before he stretched out the entirety of his muscular physique - his shirt and jeans long ago abandoned on the floor to leave him in little but his underwear. It wasn't until that very moment that Aiden truly considered just how little he now owned. Clothes, admittedly, had not been his highest priority while the Ark was taking on water. It was with a sigh that Aiden began to reach for those already worn jeans, the man only just managing to pick them up before Mira commented she had something to show him.

A glimpse of curiosity crossed his features, his bare feet padding towards the foot of the bed where her heavy duffle bag laid open. The Lego Bugatti prompted a small simper upon his features, those jeans in his hands easily tossed to the foot of the bed as he, instead, reached for the car he'd spent hours attentively putting together. "You rescued it." He commented softly, turning it this way and that to ensure each cog was carefully still in place despite the jostling trip it had endured. His gaze fluttered from the car in his fingertips towards the Lamborghini she placed on the dresser, followed by the jewelry he so often wore. Each item was somehow...sentimental in its own right. How he had...forgotten them all. Aiden placed the Bugatti back down upon the top of the low standing dresser, the Alpha instead reaching for his watch as he fastened it around his wrist where it surely belonged. The rosary beads were once again pulled over his head, the very weight of him almost...reassuring, if only for the fae man they too so represented. "No, Mira....you did wonderfully. Thank you, for this." He murmured, purposefully striving to put to rest the clear defeat within the girl. Gingerly, he leaned forward, letting his lips brush sweetly against hers in a chaste kiss. She had little idea, he suspected, how much those items truly meant to him, much less what their saving, in turn, had also meant.

The mention of clothes only drew his attention back to the original problem at hand, though. He watched as Mira leaned down to rummage through the duffle bag at her feet, only to pull from its depths clothes for both of them. His brow pitched upwards in slight surprise, the Were-King hadn't anticipated the level of thought she had put into those few moments she'd had within the sinking ship. She'd clearly put it to good use. Aiden reached for the black, cotton shirt, pulling it over his head with little consideration to all the times he'd worn it. His pants were pulled on with the same lack of consideration. Later, he would have to take stock of what was in those duffle bags and what they might need to purchase, even if it was only for the short term. Nevertheless, Aiden was content to wait until Mira deemed herself presentable before the pair finally emerged from their bedroom on the bottom floor of the mansion. The home was, admittedly, peacefully quiet in those daylight hours, the sound of Matteo in the kitchen the only noise that broke through that tranquility. He could already smell it - what he hoped was pancakes and yet, with his Father, it was equally as likely to be a veritable feast.

Nevertheless, Tetradore led the way towards the kitchen, the vibrancy of his gaze falling upon his father before the double oven. "Hey Matteo, you wouldn't believe what Mira asked me this morning." His very words seemed to her eyes to widen, the girl clearly not believing he had actually intended to tell his father of her fears. Those flailing limbs in an effort to silence him, however, only prompted that warm chuckle from Aiden's lips. For a brief moment, his attention was fully focused upon the woman who had taken to attempting to cover his mouth, Their struggle was brief, however, before Mira ended up wrapped in his arms with hers pinned at her side. "She thought I wasn't dating her because I was sleeping with someone else." The almost indignant huff upon her lips only furthered that simper upon his features if only for how unlike the Alpha her fears were.

Aiden released her in the aftermath of that announcement, a ghost of a simper still present upon his features as his bare feet padded across the cool tile and towards the barstools on the opposite side of the marbled island. As much as he would have liked to simply have sat there, however, there were a plethora of problems that required his attention, one's he'd undoubtedly have to face today. The first of which, naturally, was to begin the search for a new home for the pack. He pulled his phone out of his pocket, glancing vaguely at the battery symbol at the top of the screen. He'd have to add getting a new charger to the ever-growing list of things that he'd have to replace. "Matteo, can I use your charger?" He inquired, well aware the fae could summon literally anything to him if he so desired it, all the while, his fingers flicked effortlessly across the screen, pulling up the internet to look at the boats available within the area with the feeble hope that one might meet their needs.