I'd give up all my tomorrows; 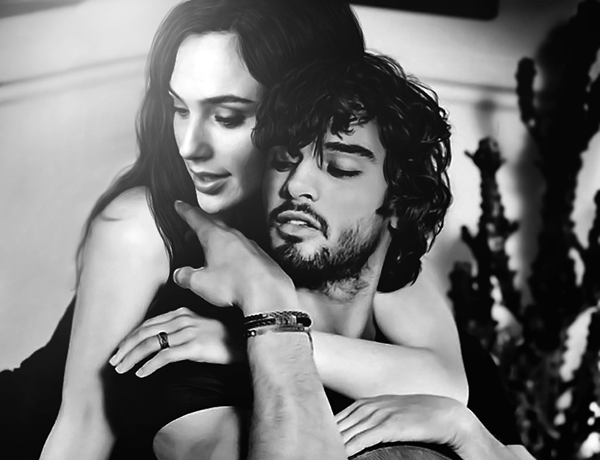 Sleep, if it was within ones grasp could help in mending a frayed mind, in creating a resolve that hadn't been there before. Sleep, when it found her was best felt within the strong arms of Tetradore. The comfort she found within that hold was far more than she'd ever admitted. After all, she had always possessed a fortitude, that found her standing tall while the waters raged around her. But last night had rattled her, far more than she allowed it show. Disaster seemed to naturally gravitate toward supernatural king like a vortex. It like they lived by other rules unknown to man and for that, they paid an undefined price. Last night had been one of those... a complete blur of activity and emotion. It left them all drained. Having a home destroyed was like having a piece of you ripped away and violated. She had her own suspicions and yet how far away they would be from the truth. But the truth of the mater was, it could have been worse, for that much she knew and was perhaps grateful that they had all gotten away with their lives. Yet she could hardly help that feeling of injustice to it all. Was it even injustice? Or was it just life? As much as life had been known to take away it was also known to give... in some respect, even though sometimes one far outweighed the other. Mira was not one to dwell on that for long, rather she wished to take action in at least some small way.

She hardly expected or was prepared to meet Tetradore's family as she did. A perfect little secret that he kept hidden from the world like he did his first name, even if she had already known it. It was as though pack and family were two separate entities entirely to the were-king. Was that what it was? She had deduced enough to understand why he kept them a secret. Being associated with royalty certainly complicated things, it made perfect sense that he would conceal it. Her mind reminded her of when the hotel staff had called him 'Lord'. The title now didn't seem so farfetched now. Was there more? More clues all along that she had been so damn slow at piecing together?

Yet nothing explained why his supposed dislike to his name, one that his family had used so liberally. hate his name so much only to have his family speak it so liberally? Not once had they addressed him as Tetradore. He acted differently around them too. It was interesting to see him through different eyes, one of many he had shown her in two years. She had seen so much and yet there were times when she had felt like she barely saw beneath the surface. How she wanted to see it all, even the darkest parts, even if they hurt like hell. It should have bothered her more than it did and yet how patient she had found herself with him.

Mira was only vaguely aware of Tetradore's absence from their bed, that heaviness of sleep prevented her from opening up her eyes. She must have fallen asleep even deeper asleep as it felt like only just a blink when she felt the shift in the bed once more. Even then, she managed to gravitate toward him once more. When she awoke, it was impossible to know what time it was, only that the sun crept and bled into that room from around the blackout curtains. She could hear the birds outside chirping and the vague sense of life within that estate was going on while they slept. Even though it was the sound of Tetradore's breathing that ensnared her most, lulled her into simply just resting accompanied by her thoughts that were neither volatile and destructive nor were they peaceful.

She felt his arm around her as if he was afraid she would vanish entirely... Or perhaps he simply was drawn to her eternal warmth. That warmth which radiated from her molten core, a volcano at rest. The she-wolf matched her breath with his then. As if the act alone obliterated all the walls he kept. How she wished she could take some of his burden on herself.

But now, she couldn't lie... they were safe at least. Even though they were surrounded by a crippling uncertainty. They had each other. The pack was still a unit even though they were so far apart, even if there was a wrongness to that fact alone. It would not be for long she knew it in her heart. But for a little while within the satin luxury of that bed, with those arms... she could pretend like everything was fine. How many questions she had... that she wanted answers to in his own words. How she wished he would just give them to her without asking and yet she knew better.

It was when his breathing changed that she sensed that slow, reluctant awakeness had begun to seep into his limbs. That tension he always seemed to hold in his body began to return. She could almost imagine his emerald eyes as the blinked sleepily awake behind her. Mira ensnared his hand that that once wrapped around her. She gently moved that hand toward her lips where she placed an affectionate kiss upon. How at that moment it was so hard to imagine those knuckles being used for brutality or anything but this.

Mira soon shifted slowly but deliberately within his arms so she could face him, lying on her side as the bedsheets sagged. Her molten golden eyes seemed to glow a subtle, warm life of their own. "Hey you." She uttered softly. Was it even morning anymore? She hardly knew, nor did she truly care. Her rich dark brown locks seemed to frame spill out around her, tickling her exposed shoulder. She yawned, stretching out her body in a delicious stretch she felt all the down her toes. "Or should I say hey boyfriend.." She teased her voice barely above a whisper, as her golden eyes flickered to his curly locks that seemed to have a life of their own the way the fell across his forehead before she met the vivid green of his eyes. "I think it's going to take a moment to get used to that. Unless it was all just a dream..." It was a silent question... but a question all the same. One that seemed to carry far more weight than she realized.

Derp express has left the station.